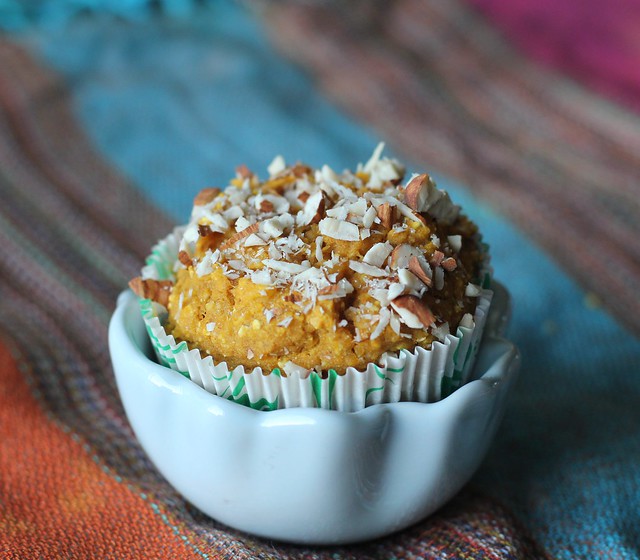 I know, I know the last couple of recipes have been very indulgent. Creamy chocolate pudding and Dahi- Vada. What can I say, I really love them.

Cheese, whole milk, elaborate process, whisking. This recipe is an exact antidote to that.

One pot prep. Healthy. No added sugar. And Varun approved to boot.

Cornmeal, pumpkin and applesauce come together in these muffins to create a naturally sweetened muffin which is great for breakfast with eggs ( or just coffee), after school snack or with chili for dinner.

It has fiber, good carbs and protein.

And did I say no oil, sugar or butter.

They freeze well in an airtight container and are perfect to be made on weekend when your toddler naps or when he wants to help in the kitchen and you are ok with a little mess.

Microwave when needed for a minute for a healthy snack with a pat of peanut butter or as is. 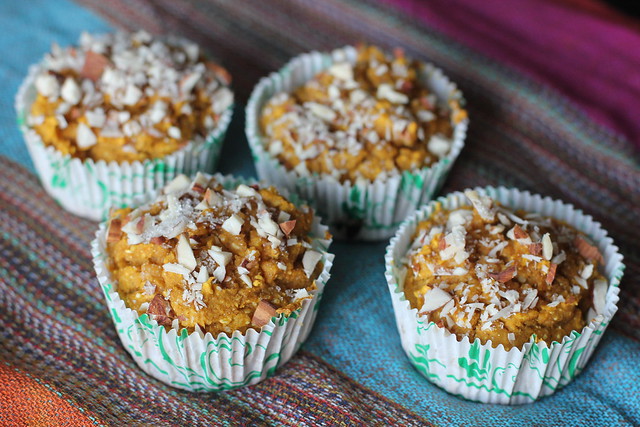 2. In the meantime, mix all the dry ingredients ( cornmeal, flour, baking powder, baking soda and salt) in a large bowl or a stand mixer.

Dump pumpkin puree, applesauce and egg in the same bowl.

Mix well for couple of minutes ( by hand) or a minute, if using a mixer on low-speed.

3. Scoop the mixture in paper cups.

Enjoy warm or frezee for later. 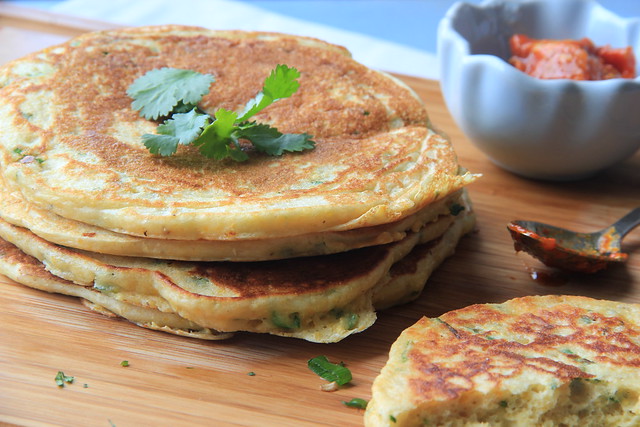 I am craving spicy food these days.

Pohe (flaked rice), spicy fish curry, chicken wings with hot sauce, spicy soups, curries and dal. The list is endless. Thanks to mom being here and her cooking; its easier to indulge in the spicier palate.

Yesterday, we made these cornmeal pancakes for breakfast. After routine of eggs, toast and oatmeal; they were a refreshing change. 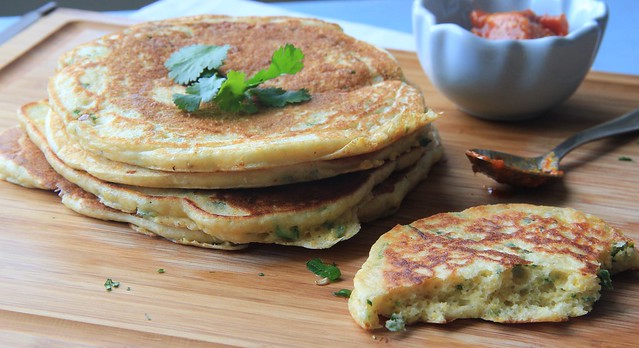 The pancakes themselves were not too spicy ( though you can kick up heat a notch if you will easily with more green chilli peppers) but with homemade pickle it sure did hit the right note. I suppose some garlic chutney would go well with it too.

I wanted to add grated zucchini or cucumber to them but we didn’t have any on hand so made them plain. This looks like a good vehicle to sneak in some veggies. I made a couple of small-sized ones for Varun. He ate the bits without cilantro so next time I will chop them super fine so he gets in his veggies for the day. 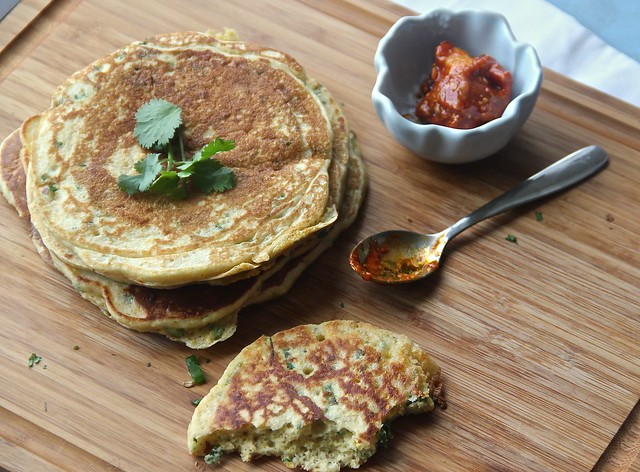 1. In a large bowl, mix  cornmeal, flour, baking powder and salt. Set aside

2. In another bowl, beat the egg with milk. Add yogurt and beat well so there are no lumps.

4. Heat oil in a non stick girdle. Ladle 1/4 cup of the mixture on to the girdle when hot. Cook on each side for a couple of minutes till golden brown.

Green Smoothie with Kale and Peaches

A semi seasonal combination, Kale and Peach smoothie is truly my go to second breakfast combination these days.

As part of the move, we found our Magic Bullet. I love it for its one container usage – prep/make and drink from same container makes it prefect for on the go food recipes, not to mention one less container to wash. So we have begun making smoothies. They are great way to incorporate greens, veggies and fruits.

A Vitamix would make it even smoother and kid friendly (green leafy bits would be blended real fine) but this works for us for now.If we do find ourselves drinking a lot of smoothies consistently then we will consider an upgrade but so far I am a fan of the magic bullet.

Without ado, here is my ginger spiked green smoothie recipe.

1. Start layering the coconut milk, frozen fruits, kale and ginger in the magic bullet container. Screw on the blades and give it a whirl till its all blended and smooth.

Divide into 2 small glasses or one tall one.

I am in the last few weeks of pregnancy. In the home stretch. So far everything has been same as first pregnancy.

Except that since I am at home ( and pregnant and writing  food blog), I am hungry. A lot. All the time.

After breakfast. After lunch. And mostly immediately after dinner. Also especially around 4:00 pm.

I feel like a cow, grazing all day long.

Fed up with constantly raiding the fridge, I decided to make something more filling and scrumptious so that I could eat it again.

Paneer masala toast was born out of that necessity.

I ate one. And decided to save one for Varun as he loves paneer. But it was so good that I made myself another one half an hour later. Gobbled it all up. Cleared it all up so there was no trace of it left.

I felt so bad ( for being a bad parent and not sharing it with Varun) and yet so good.

I have to make it again. In a bigger batch. And share with family. Because thats what home cooking and parenting is all about. Right? Right?

1. Heat oil in a skillet. Add cumin seeds once heated. As the seeds sizzle, add the chillies and red onion. Let the onion cook for a minute or so taking care not to burn it.

3. Add cilantro leaves and let cook for another minute or so till the paneer is cooked. Taste and adjust seasonings.

Remove and keep aside in a bowl.

4. In the same skillet, heat tablespoon of butter. Grill bread slices in the buttered skillet. Flipping over once browned taking care not to char it.

5. Once the bread is grilled, spoon pesto sauce on one of the bread slices. Layer the paneer masala filling. Lay the tomato slices on top.

Cover with the other grilled bread. Press down with a spatula.

6. Remove from the skillet and cut in half.

Posted in Food, Snacks and Appetizers

I know its been ages since I posted. My bad. I know excuses, explanations simply wont cut it. Another heartfelt attempt to start blogging at least twice a week.

My sincere apologies for the tardiness thus far.

But we didn’t have eggs on hand. So I searched online for soft fluffy ones without eggs. And randomly picked a recipe and decided to give it a try. After all how hard can fried dough donut be?

Here is a recipe for simple eggless fried donuts. Its yeast based so it’s not instant gratification but it was fun kneading and rolling with Varun. We both waited eagerly for the dough to rise and then shape and fry them. Patience sure isn’t a virtue in my family.

I am sure the recipe can be easily used for baked donuts, but the general consensus was that baked donuts don’t stay fresh as long. I didn’t really have to worry about that as they were all devoured while they were still warm!

1. Warm milk and dissolve sugar in it. Add yeast to the milk and set aside for 10 minutes to froth. If the yeast does not froth, discard and repeat with fresh milk and yeast.

Do not proceed with the recipe if yeast isn’t active.

2. Take all-purpose flour in a bowl, add nutmeg and salt. Mix well. Add milk and yeast mixture as well as butter and cream. Mix and knead well for about 8 – 10 minutes.

Grease your hands with oil for kneading.

The dough will be a little sticky but resist the temptation to add more flour.

Set aside to double for about 2 hours

3. Once doubled, punch, roll out till 1/2 ” thick. Cut shapes using cookie cutter or bottle caps. We made hearts and regular circular donuts and had plenty of donut holes.

6. Heat oil and keep it on a medium flame. Fry donuts on low to medium -low  flame till golden brown,

Adjust heat so that the donuts don’t burn / brown without cooking from inside. It took me about a min to fry each.

There are some dishes that come together effortlessly and are like a party of flavors in your mouth. Tomato and pesto is  one such combination. Quality ingredients shine and provide easy snack, lunch or appetizer.

I found some cherry tomatoes at our local supermarket. They were sweet and fresh and paired with pesto made for a savory side to soft scrambled eggs. They made the breakfast that much more special.

If you are planning a summer brunch with friends, this gotta feature on your menu. Paired with a salad and rose there is nothing more simple and more fitting ode to summer than this.

2. Roll out the dough into a 8 inch circle about 1/4 inch thick. Prick all over with a fork to prevent puffing leaving about an inch edge around the perimeter untouched.

3. Blind bake this pastry dough for about 6 – 8 minutes till golden brown. I weighed this down with an oven safe bowl with some beans to keep the center unpuffed.

4. Remove from oven and then layer the mustard and pesto over the base. Leave the edges as is.

5. Arrange the tomatoes in rows or circles. Sprinkle with salt and pepper.

6. Put it back in the oven and bake on middle shelf for about 12 minutes or so till the tomatoes are cooked at the edges and pastry is brown at the edges.

7. Remove from the oven and let cool a bit.

Posted in Food, Snacks and Appetizers