When we had newly moved to Seattle in 2003, every year, we used to go on a long road trip on 4th of July weekend. Crater Lake, Yellowstone, Canadian Rockies, coastal Oregon were visited with friends and their visiting families. Trip to Crater Lake National Park was the first such trip we took. A deep blue lake in the volcanic crater with crystal clear water surrounded by high cliff walls and towering pine trees. And friends to the mix and it has makings of an EPIC trip. A trip that you will never forget. 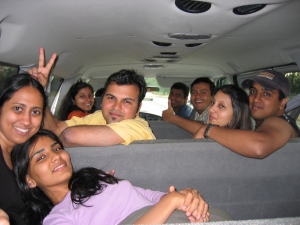 We rented a 12 seater van from Redmond and set out on a long drive to Crater Lake on Friday evening. We had another group in a sedan.It was almost 2 am when we reached our rented house about an hour away from the National Park. There is limited lodging very close to the national park. And of course it is booked solid in summer and especially on long weekends. It’s hard to get last-minute reservations with 15 -16 people.

A day inside the Crater Lake National Park

The next morning we woke up fairly late and then after a really late breakfast we headed to Crater Lake.  It was a beautiful sunny day and there was absolutely no one on the road. We reached the park post lunch time. We followed the rim drive and pulled over at several places to take in the breathtaking scenery. The deep blue water is mesmerizing. We hiked to the bottom to reach the shores of the lake.It was easy-going down but strenuous coming back up!

We sat on the boat jetty for quiet some time as no one wanted to go back up really.

But these restrictions have ensured the lake is crystal clear, clean and pristine.

After the hike we were all hungry. So we decided to go to the Lodge and have late lunch. There was some renovation and reconstruction work  going on, so we couldn’t really eat there. There were a couple of hot dog stands but they didn’t have any vegetarian option. Most of the us just had ice-cream and fries and such for lunch and were a bit grumpy for a while.

We continued with the rim drive this time pulling over for snow fights. Yes, even in July you will find snow in this national park. It’s so awesome to have a snow fight under the sunny skies. We behaved like little kids with no regard whatsoever to what other folks may think!  Later in the evening we headed back to our vacation home to make a hearty dinner. Drinks, music, cards, singing and pav-bhaji! OMG it was insane.

The next day we went white water rafting in the Umpqua river which was cool. We wore wetsuits as the water was still very cold. We went to a neat hole to dive into and had just a ball of a time in spite of the cold water.

Later we drove to the nearest beach (which was still a couple of hours drive) through beautiful valleys, across quaint bridges and rivers to watch the sunset. As with all beaches in pacific northwest it was cold and we had our jackets and sweaters on. In July. Yes. Really.

We drove back after dark and had another night of drinks,music, cards.

Sand dunes and riding ATV’s on them was the agenda for last day. Towering sand dunes which shift every day based on winds,so tall that you cant see whats on the other side till you are the very top. They are almost vertical towards the top edge. Very exhilarating. . I was super thrilled till we got there and then was I was shit scared as a few friends who had come back earlier were injured. Some of us got stuck, others had their ATV’s toppled over.  We managed to go over to see  lakes, hidden valleys and pretty dessert landscape.

If you are in Southern Oregon then it is a must do. You don’t even need directions as you will see hoardings and ads all along the freeway.

After an adventurous ride on the sand dunes,it was time to head back to Seattle. It was a long drive back home from Florence, Oregon to Seattle. Most of us dozed on the way back while others just chatted away.

It was an EPIC trip. It marked beginning of  annual fourth of July getaways till our master trip planner moved from Seattle to Bay Area.  But its awesome to remember those fun times especially now that we are older and scattered all the way around the world. One day,I hope we get to have another memorable trip with old friends and their new kids in tow!