← Road Trip To Hampi
Exploring The Royal Ruins of Hampi →

Hampi Heritage Site is basically made up of three major areas – Royal center, Sacred center and Anegundi on the other side of the Tunghabhadra river. The Royal center has the Kings Palace, Queens Zanana bath pools, Lotus Mahal, Elephant stables etc; the Sacred center has Virupaksha temple, Jain temple, Krishna temple, Hazar Rama temple, Ganesha temples etc; while Anegundi is the area where Hanuman was supposedly born and then met Lord Rama on his quest to find Sita as narrated in the Ramayana. The Royal center and Sacred center are well-connected by dirt road. Without kids you could possibly bike over ( bikes are available on rent) from Royal center to Sacred center if it’s not  too hot. Anegundi needs a boat ride across the river and then you can walk over to most destinations.

On our first morning in Hampi, we decided to go to Vithala Temple Complex – the most famous temple of Hampi in Sacred center with its iconic Stone Chariot. Our plan was to be there around 9:00 am but we managed to reach around 10:00 am. It was already hot by then. 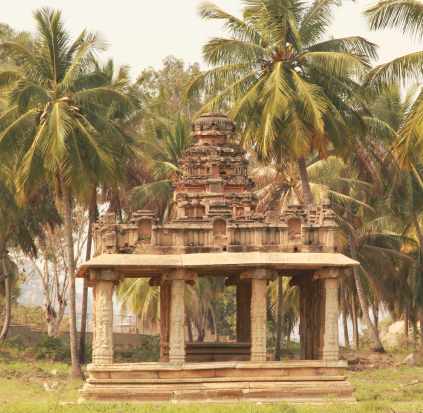 The actual temple complex is about a kilometer walk from the parking lot and there are electric golf carts to ply visitors to the entrance. Of course you can walk and see more temples, monuments, bath tanks and marketplaces along the way. But as we had two toddlers who love nothing more than to play in the mud-dirt, we took the golf cart. 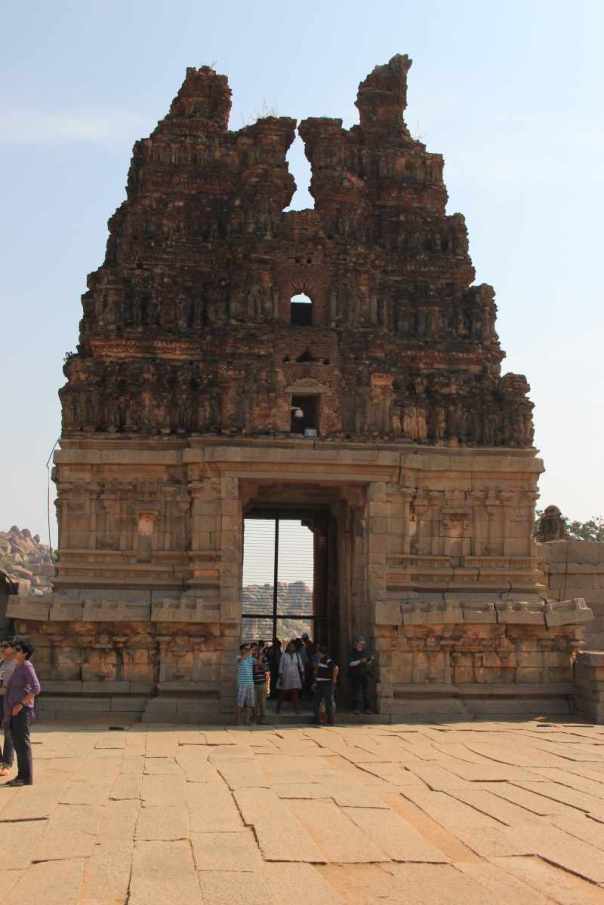 We planned on hiring a guide for the day but there were none to be found. Without a guide, unless you are a history buff, the monuments don’t make much sense. Finally we managed to find one guide and we started the tour of the complex around 11:00 am. 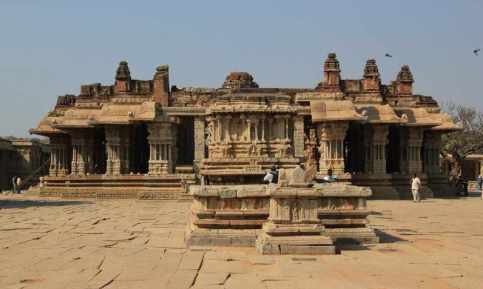 Built in between 15th and 16th century, the temple complex is huge with the main temple and its attached pillared prayer hall in the center and surrounded by Kalyana mandapa, monolithic stone chariot and other smaller temples which I unfortunately didn’t catch the names of as I was busy chasing Varun. The beauty of the main temple’s prayer halls are its musical pillars which emit the key notes of Indian classical music. The pillars are made of single stones but can be used to play a harmony. Apparently, the British did not believe that the pillars are made of single stone, they tore down a few pillars to explore if the pillars didn’t hide a concealed instrument of any kind that was capable of playing such melodious tunes. 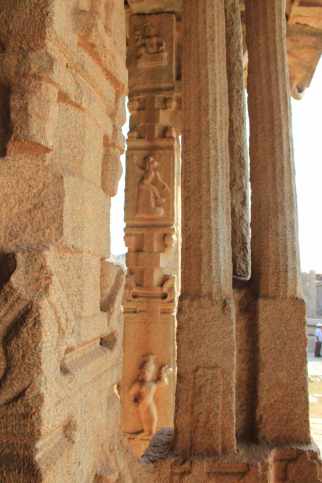 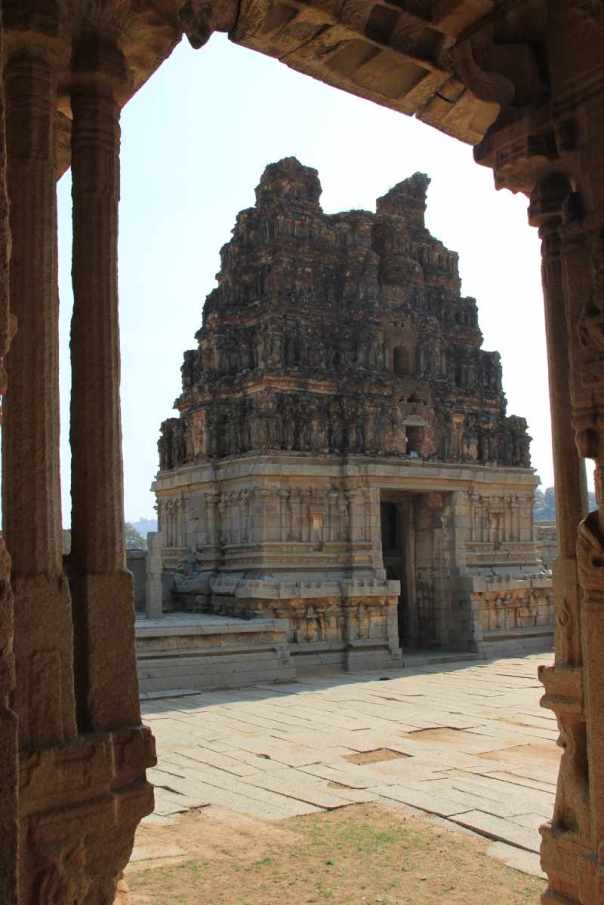 The main monument was closed for restoration but the guide played us some music on pillars of surrounding monuments. We heard light and melodious tunes as we pressed our ears against the other pillars to hear them.

The carvings on the monuments are exquisite.Elephants, frogs, lions, horses, chariots, various gods and goddess’es, dancing figures, poses from Khajuarho- you name it and you get to see them here. Smaller temples carved onto base of the main temple – sort of like a ‘temple on a temple’. The edges with various patterns depicting different designs typically seen on bangles. And they have holes and flutes to allow rain water to drain without damaging the monument.

The monolithic stone chariot is mesmerizing. I wish we had seen this place either at sunrise or sunset without the crowds.It would have simply blown me away. To our dismay, the place was overrun with tourists and school kids on the pre-Christmas weekend.

We walked around the complex taking care that the kids don’t trip on the stone courtyard or fall off the edges of the raised platforms. We were probably there for couple of hours as the guide went over the details and history of the place. The complex also has ‘feet’ of Vithala and Rakumai idols which have been moved to Pandharpur in Maharashtra. So the temple is not a ‘operating religious temple’ anymore. 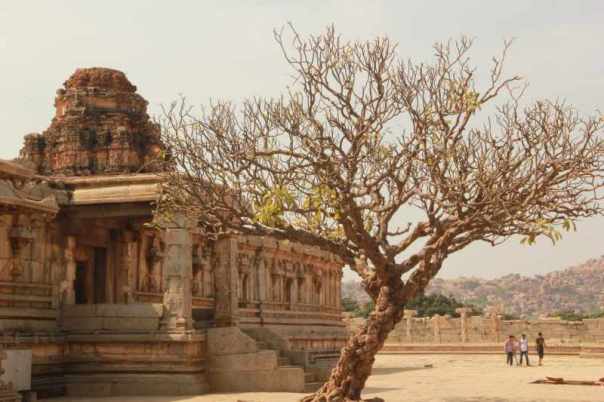 There is absolutely no shade around. I felt bad for the ladies who were weeding in the mid day sun. But they seemed to be content working in such exquisite location. There were other workers around working on re-paving the courtyard and adding support beams as necessary to other smaller monuments in the temple.

By then it was very hot. Kids were flushed and tired with all the running around and climbing the steps. We rested a bit in the Kalyana mandap hall before continuing on to Royal center.

The detailed carvings, the enormous stone chariot, the hundred plus year old tree in the courtyard, the musical pillars were astounding. Most people end their day tour with Vithala Temple complex but we were glad that we started our date on such a high note.

A travel addict, self confessed foodie and a mom trying to make SFO my home after a decade in Seattle and a stint in Hyderabad, India.
View all posts by rutujak »

← Road Trip To Hampi
Exploring The Royal Ruins of Hampi →